The French president, François Hollande, endorses multi-tasking. On his left, Julie Gayet, his lover; on his right, Valerie Trierweiler, his long-term girlfriend and the First Lady.

Who knew that François Hollande was so hard. Such a dog. Such a Don Juan. Such a baller. Forgive the porno-speak, but those are just a few examples of the kind of language that’s been recurring in the endless commentaries of the Hollande affair in recent days. Even if no one in France is really surprised that the president is having an affair, they actually do seem surprised about—and impressed by—just what this President has got up to.

He’s “a magnificent baller!” declared Frédéric Mitterand, the former Culture Minister under Sarkozy (and the nephew of former president François Mitterand), literally cackling with tawdry glee on Belgian television in a clip that was leaked today.

Mitterand (who’s got his own sexual affairs baggage about which he’s been quite explicit and who’s been known to sometimes go overboard in his public comments) explains exactly why he is so surprised that the President pulled off such an exploit: “He doesn’t really have the looks for this kind of affair…if you were looking for someone to play the role of the total seducer, you wouldn’t pick a guy who looks like François Hollande!”

Mitterand, in his own bawdy terms, has said out loud what everyone has been thinking silently to themselves (and a little less silently: the very well-known political journalist, Michèle Cotta, was caught on microphone calling the President “ugly and pathetic”). Quite simply, Hollande didn’t look or act the part. There seems to be a general sense of genuine surprise that Hollande really could be such a seducer—this kind of seducer in the most traditional and literal sense of the term, with all its masculine and caddish connotations. The kind of guy who would have been involved with a beautiful and much younger actress for, reports are saying today, what may have been nearly two years, while still involved with a First Lady, also younger and attractive, for whom he’d left his previous partner of over 20 years.

No one was surprised that men like Strauss-Kahn, or Chirac or Mitterand, would have had affairs. Those men had an aura, they looked, respectively, charismatic, charming, and regal. But Hollande just didn’t look like a man who would—or could—engage in the kind of behavior that, from the outside, plays perfectly into the cliché of the 19th century gallant or the contemporary bad-boy.

That wasn’t Hollande. Hollande was the man without definition, literally and figuratively, the overweight insipid-looking guy nicknamed Flamby—after a shapeless dessert pudding—who went from a strong dominant mother to his strong dominant partner, Ségolène Royal, and then a strong dominant girlfriend, Valerie Trierweiler. Trierweiler’s unflattering and sexist nickname is Rottweiler, because of her reputation for being overbearing. (On the evening of Hollande’s victory, cameras captured her ordering him to kiss her—“on the lips!”—in front of the crowds.) 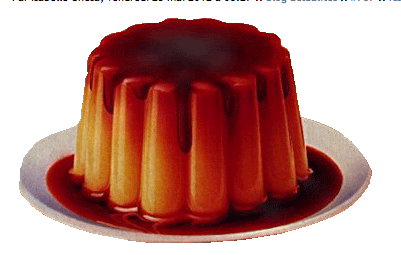 Flamby is a jiggly caramel pudding dessert. It was also Hollande’s nickname.

Hollande was the man whose apparent inability to effectively deal with France’s economic problems, to rally political will to make tough changes—whose perceived impotence had translated into the lowest presidential ratings on record in modern France.

But suddenly the President’s edges have hardened. If there’s one thing he’s not, it’s impotent. He’s now the man with the desire and the drive to pursue a reckless love affair. To follow his wants. To take what he needs. Despite his circumstances or the risks. (Or, arguably, decency, when it comes to Valerie Trierweiler, who evidently discovered her relationship with the President was over when he told her, the night before, about the imminent tabloid magazine cover on his affair with another woman).

Everybody is terribly impressed that that guy not only got the girl—but went to get the newer younger sexy girl, while holding onto the previous girl. “A lady-killer!” say innumerable commentators, “It’s a shake-up!” headlines another magazine. He’s no Flamby anymore.

This is, for better or for worse, a model display of the cliché of virility: boundless sexual energy and a sense of power and impunity. “Sexually, François Hollande doesn’t come across as a modern man anymore,” said Eric Fassin, a well-known sociologist, “On the contrary, he’s revived a traditional model in his economic policy as well as his romantic life, from here on in, the President has set a course, and he’s going to hold to it firmly. In brief, he’s become ‘a man’, ‘a hard guy, ‘a real one’, at the expense of his women….”

Firm, hard, real. According to friends and colleagues of the President (none of whom actually agree to go on the record) this is actually Hollande’s true nature revealing itself. In a story in the newspaper Le Parisien, someone cited as being “close to” the president says that “his physique makes people underestimate him. It’s a big mistake. Inside, he’s a blade of hard steel.”

Perhaps this blade of hard steel will take an invigorated approach to leading France and that he’ll hold firmly to the new economic course he set last week, pledging policies to make the economy more competitive. But Hollande appears to be dealing with the matter on a personal level, with Valerie Trierweiler, in the same firm, hard manner. He’s set a course and he’s holding to it firmly. Like a political matter, distant and business-like. Ouch. Hollande left Ségolène Royal, the mother of his four children, in a similar way that evidently he’s been leaving Trierweiler for the past two years: gradually, silently, a little insidiously, without actually telling either woman until public reports would eventually force him to confirm that he was more or less already gone.

Which, even for a “magnificent baller,” is pretty shabby.

Julie Gayet, the 41-year-old actress with whom François Hollande is alleged to be having an affair.

So the big news in France today is that the president, François Hollande, might be having an affair. If it sounds like the opening line of a late-night show, that’s because the French public and French media seem to be greeting the news with the same deadpan tone that comics like to use. Because nobody’s really that surprised and, mostly, nobody actually cares that much.

Which doesn’t mean there hasn’t been a big media frenzy and hubbub of social media activity, and lots of snickering. First of all it’s a break from conversations about the Dieudonné controversy. People are tired of debating the issue of the rightness or wrongness of banning the comedian’s anti-semitic performances, so a presidential affair is the perfect—legitimate—excuse to talk about something else. But there’s no real intensity to the reactions. If people are commenting the claim by the tabloid magazine, Closer, that Hollande is having an affair with the actress Julie Gayet it’s because, well, after all he is the president of France.

The cover of the special edition of the tabloid magazine Closer headlining on “The President’s Secret Love Story.”

Many French media seem to be echoing a similar refrain: that the presidential entourage has known for several days that the story was going to come out “but did nothing to prevent it.” Which is a media’s enigmatic—or disingenuous—way of implying that, well, the story is true, without actually appearing to report anything more than the fact that these allegations have been made and that Hollande may choose to pursue the tabloid for invasion of privacy.

The enigmatic and disingenuous media is an issue that the French love to revisit. And they’ve been indulging all day. With unavowed nostalgia they recall that time, back in the 80s, when for years—nearly a decade—the media covered up the story of President Mitterand’s second family. Most observers agree today that they should condemn that time and that culture; not the President’s affair, but the culture that entitled the President and other powerful politicians to some divine right of discretion, and engendered a self-enforced censorship among the media. Since the Strauss-Kahn affair, it’s become more complicated to defend that omertà or any powerful person’s special entitlement to indiscretions.

Reports like this one of President François Mitterand’s second family–his mistress and their daughter–only emerged years after his death.

Nonetheless, there’s also been a unified chorus of responses from Hollande’s ministers and his supporters, and even his political opponents, condemning Closer’s publication of the story. They have all come out stating that the President—or, as many have said it, “even the President”—has a right to privacy. Some socialist politicians were actually refusing to comment, saying that the matter has nothing to do with politics, end of story.

So is that true? Does the President’s affair, if he’s having one, have nothing to do with politics? Is the President just a normal guy who deserves privacy? Interestingly, the editor-in-chief of Closer makes the same argument to defend her magazine’s publication of pictures allegedly proving the affair. President Hollande, she said on the radio this morning, “is a normal president who was swept off his feet. There’s no need for so much drama around (the publication of) these pictures.” That a man—even this man—falls for a woman, she implies, is no big deal.

It’s not exactly an uncalculated defence, since Hollande’s campaign slogan—which was much ridiculed—was that his would be a “normal presidency,” in opposition to the ostentatious presidency of Nicolas Sarkozy who had so immodestly spread the details of his private life before the public, divorcing shortly after his election and then just a few months after that marrying the former model and musician, Carla Bruni.

Whether a “normal” president is one who deserves the right to privacy or one who deserves the right to let himself be seduced now seems to be a question. The answer, of course, is that a “normal” president deserves both. It’s just a uniquely French rhetorical obliqueness (or disingenuousness) to defend the former while actually, really, defending the latter.

And what’s also wonderfully, uniquely French is that politicians are defending the president at all. Could you ever imagine American politicians simply refusing to talk about published allegations that the president is having an affair? Could you ever imagine a senator or congressman, when asked about widely-circulated photographs featuring the President of the United States of America spending the night with a woman who is not his wife in a building that is not the White house—simply saying it’s none of his business? Well, that’s how they roll in France.

To give another example of how these things go down in France—and to continue reinforcing a few more stereotypes about French culture—there is some speculation among political analysts and pollsters about the possibility that this affair will actually be good for Hollande politically. The same magazine, a mainstream tabloid publication, that broke the story on its website last night published a poll today asking readers whether:

One final subsidiary point in the underwhelming affair of  President Hollande’s affair is the fact that he would find time to have one at all. It never ceases to amaze and delight me that the President of the 5th largest economy in the world—that also happens to be on the brink of another recession—is able to find the mindspace, and the slot in his schedule, to take a lover.

Part of the story revealed by Closer in the photographs published is of the morning after one of the supposed lovers’ trysts. Pictures show a man who is allegedly the President’s bodyguard entering the building with a little paper bag of…croissants.

In France, it’s not really a Morning After unless there are croissants. Even for the President.